Return to the main site

A Vacation That Inspires 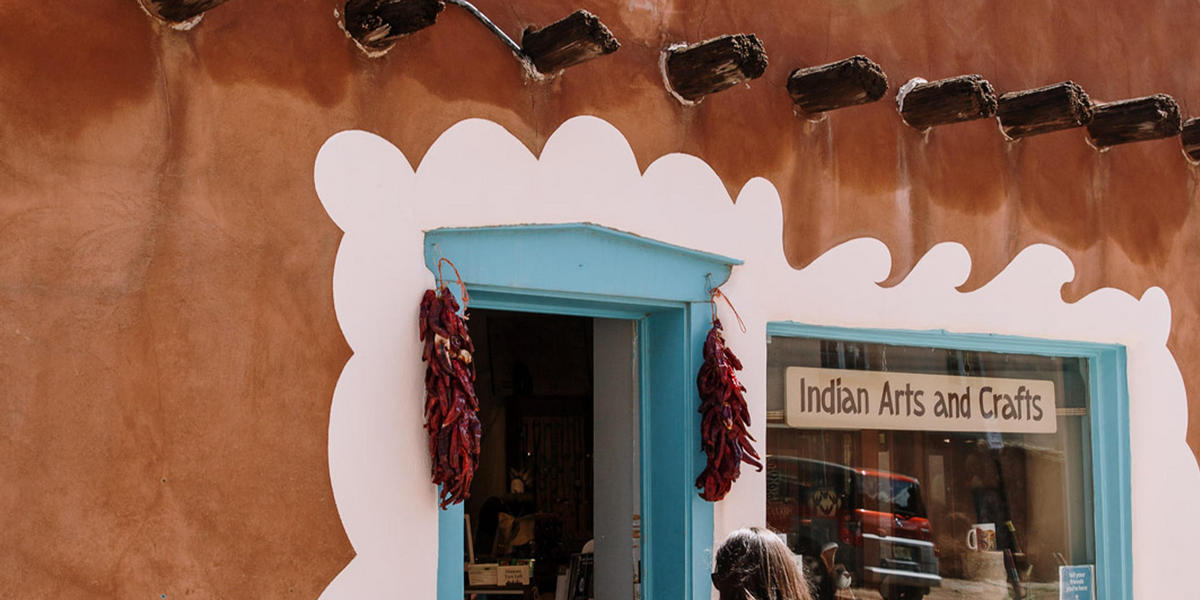 Nestled at the foot of the rugged Sangre de Cristo Mountains at an elevation of 7,200 feet in New Mexico's desert highlands, Santa Fe is a city known for its rich blend of Native American, Hispanic, and Anglo cultures and traditions. Step into these traditions and discover why Santa Fe was recently named Travel + Leisure “Readers' Choice 2017 Destination of the Year."

A Vacation that Inspires

Skip A Vacation that Inspires 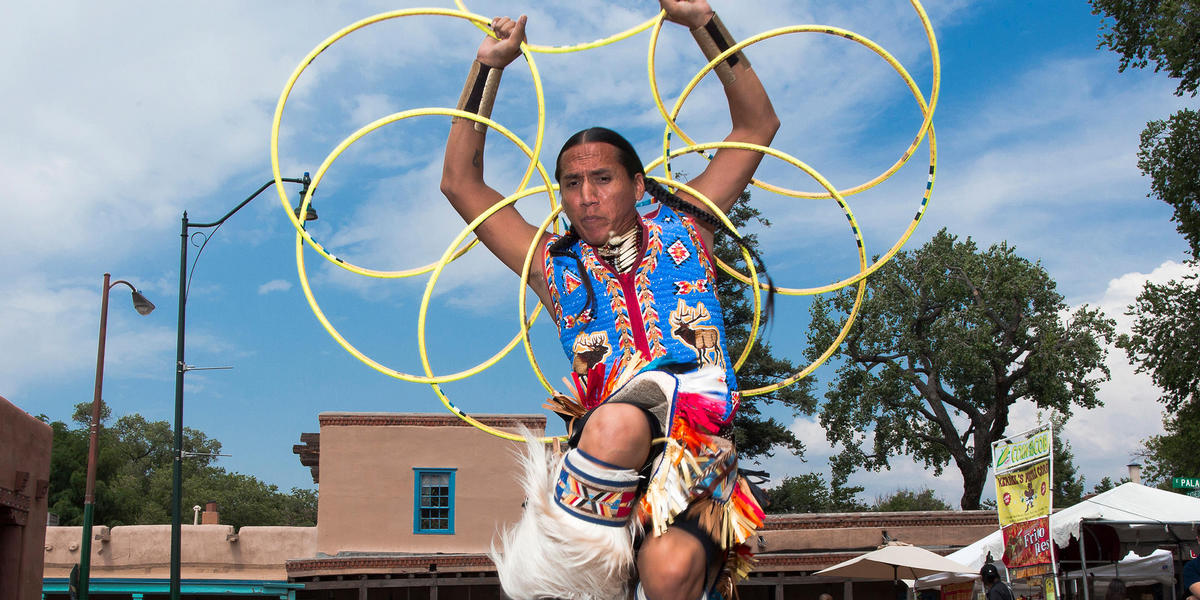 Nestled at the foot of the rugged Sangre de Cristo Mountains at an elevation of 7,200 feet in New Mexico's desert highlands, Santa Fe is a city known for its rich blend of Native American, Hispanic, and Anglo cultures and traditions. Step into these traditions and discover why Santa Fe was recently named Travel + Leisure “Readers' Choice 2017 Destination of the Year." Guests of our Santa Fe Inn are within walking distance of world-class restaurants, shopping venues, and local attractions such as the Santa Fe Plaza, the Georgia O'Keeffe Museum and the Lensic Performing Arts Center. Minutes away are The Museum of New Mexico and Loretto Chapel's miraculous staircase, a magnificent engineering marvel shrouded in religious mystery.

Year round, Santa Fe activities and events attract people from near and far. Be sure to check calendars of events and ask the concierge for seasonal Santa Fe, NM attractions, whether you’re on a family vacation, visiting solo, or on business. 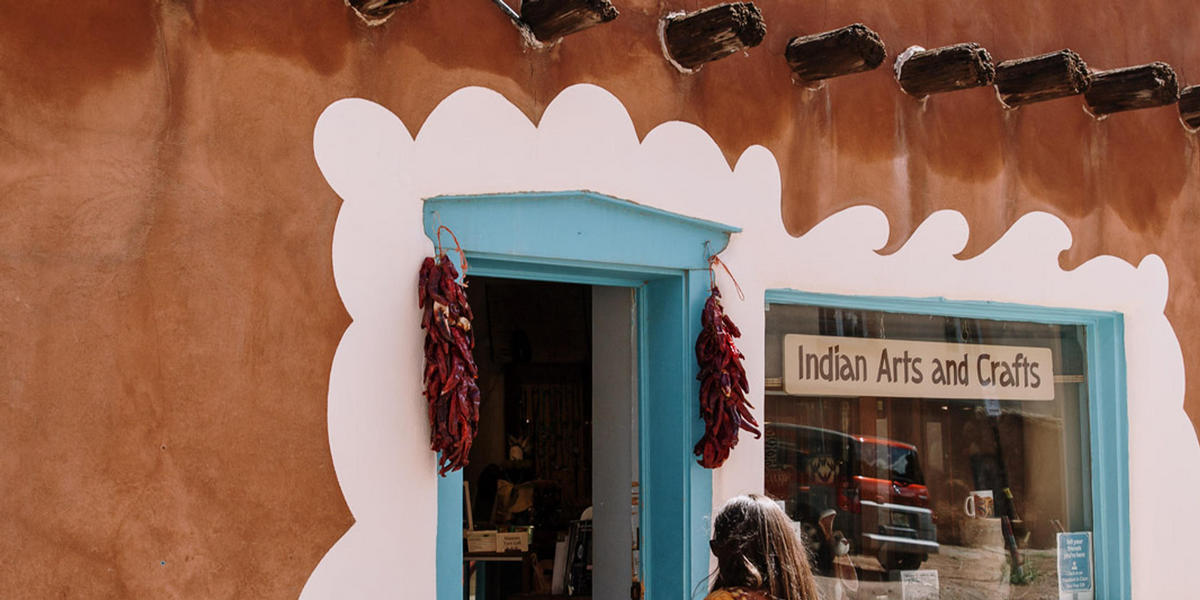 Next door to the hotel is the famous Loretto Chapel. Steeped in mystery and lore the Loretto Chapel is a Santa Fe icon and a must-see attraction for visitors. Independently owned and operated, the chapel is available for weddings, receptions and other events. 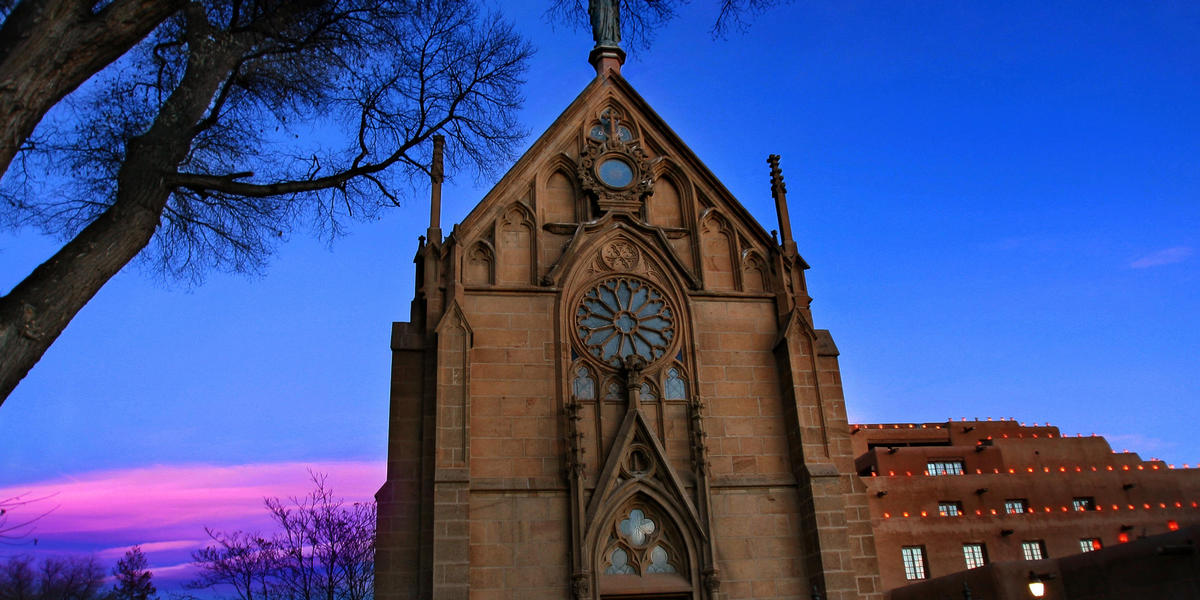 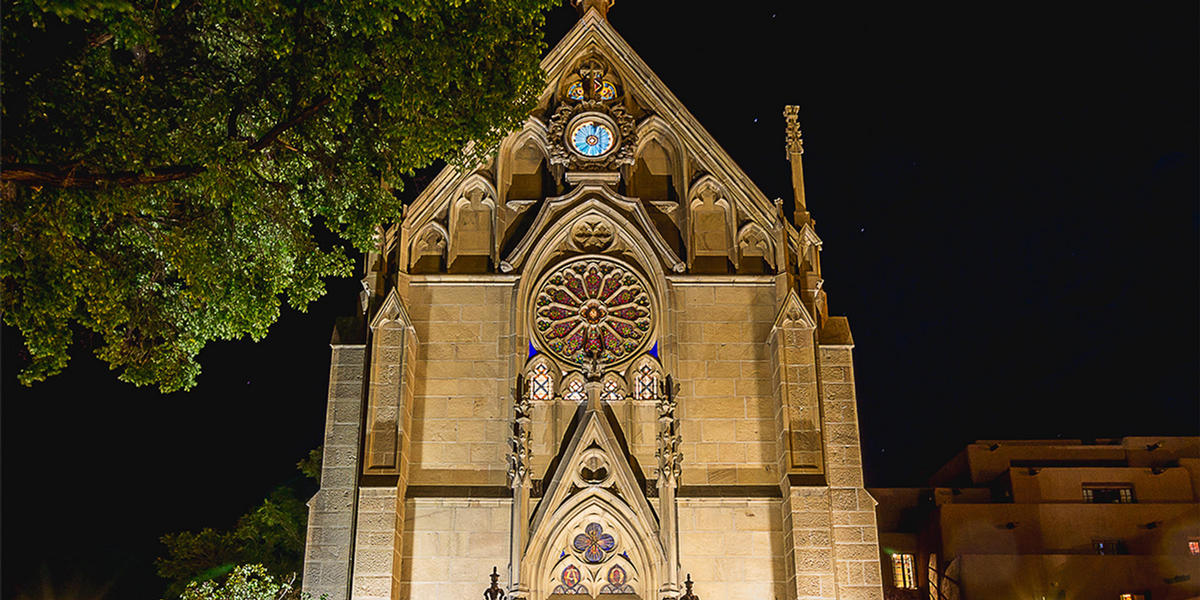 Next door to the hotel is the famous Loretto Chapel. Steeped in mystery and lore the Loretto Chapel is a Santa Fe icon and a must-see attraction for visitors. Independently owned and operated, the chapel is available for weddings, receptions and other events. Visit lorettochapel.com.

It was in the year 1610 that the Spanish founded a town that is now known as Santa Fe, the capitol of the state of New Mexico. Santa Fe was originally called the Royal City of the Holy Faith of St. Francis of Assisi or, as it was named in Spanish, La Villa Real de la Santa Fe de San Francisco de Assisi. It was occupied by Native Americans, Mexicans, and Spanish and was under Spanish control until a war which placed this area under the rule of the New Republic of Mexico for 25 years.

The history of the Loretto Chapel began when Bishop Jean Baptisite Lamy was appointed by the Church to the New Mexico Territory in 1850. Bishop Lamy, seeking to spread the faith and bring an educational system to this new territory, began a letter writing plea for priests, brothers and nuns to preach and teach. In one of his letters he is said to have written, "I have 6000 Catholics and 300 Americans." The first acceptance of his general plea was from the Sisters of Loretto.
In 1852 the Sisters of Loretto responded to Lamy's pleas by sending seven sisters who agreed to make this arduous journey to Santa Fe. Their trek was through St. Louis, then up the river to Independence, Mo. This small group was beset by a cholera epidemic, the Mother Superior died, and another nun was too ill to continue the journey and returned to Kentucky. An additional story continues that they traveled by wagon through bad weather.

The Sisters arrived in Santa Fe in 1852 and opened the Academy of Our Lady of Light (Loretto) in 1853. The school was soon founded and grew from very small beginnings to a school of around 300 students, despite the challenges of the territory (smallpox, tuberculosis, leaky mud roofs and even a brush with the rowdy Confederate Texans during the Civil War). The campus covered a square block with 10 buildings. Through tuitions for the girls' schooling, donations, and from the sisters own inheritances from their families, they built their school and chapel. 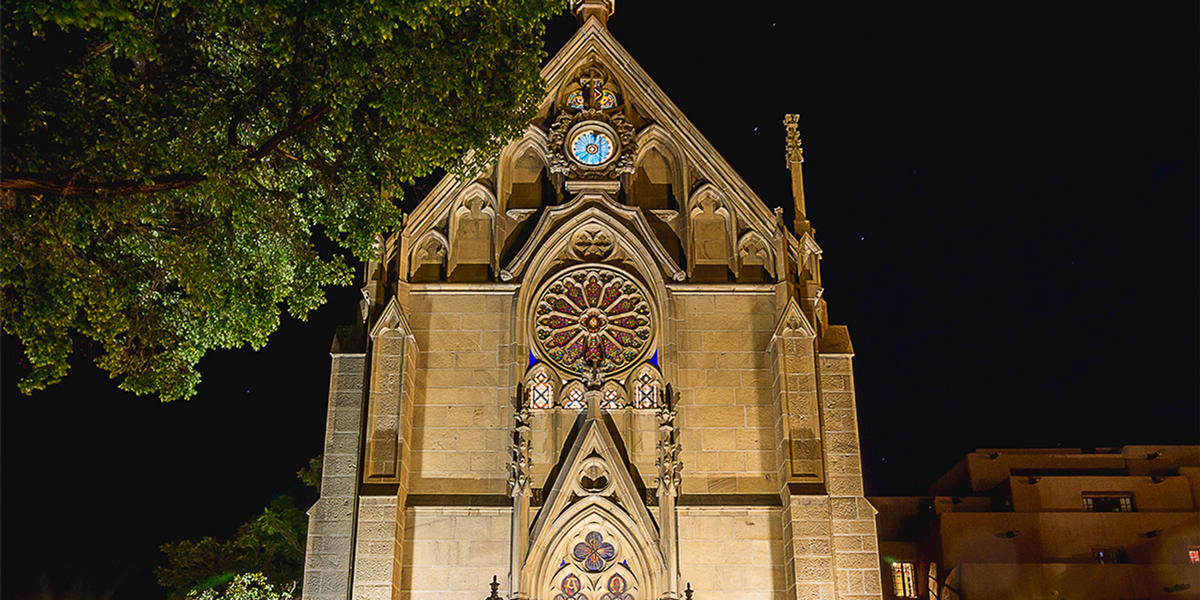 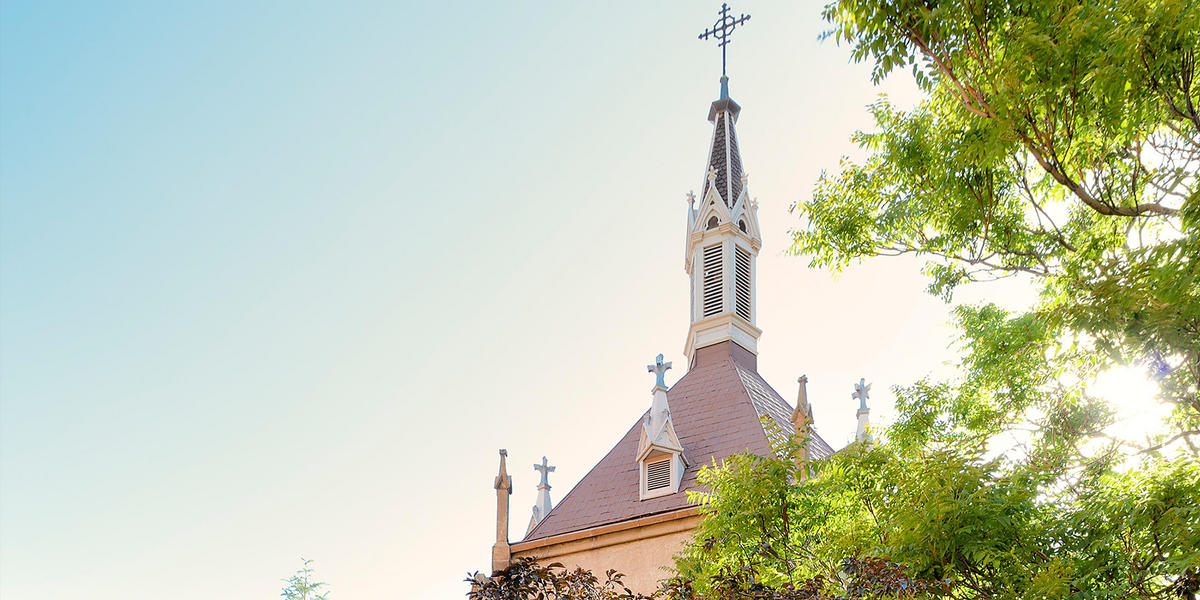 Jean Baptiste Lamy brought architect Antoine Mouly and his son, Projectus Mouly, from Paris, France to Santa Fe to be architect - builders for what is now St. Francis Cathedral. It required ten years to build. During the first period of construction, and as an apparent afterthought, Archbishop Lamy advised and encouraged the sisters to utilize the father and son to design and build their dream chapel. The older Mouly had been involved in the renovation of Sainte Chapelle, in Paris, in the early 1800's. Mouly was encouraged to fashion the Loretto Chapel after the Sainte Chapelle. It was the favorite chapel of the archbishop from his early days in Paris, France. It is reported that the sisters pooled their own inheritances to raise the $30,000 required to build this beautiful Gothic chapel.

It was decided that the school needed a chapel. Property was purchased and in 1873 work began on the Loretto Chapel.

Undoubtedly influenced by the French clergy in Santa Fe, the Gothic Revival-style chapel was patterned after King Louis IX's Sainte-Chapelle in Paris; a striking contrast to the adobe churches already in the area.

Stone for the Chapel was quarried from locations around Santa Fe including Cerro Colorado, about 20 miles from Santa Fe near the town of Lamy. The sandstone for the walls and the porous volcanic stone used for the ceiling were hauled to town by wagon. The ornate stained glass in the Loretto Chapel also made part of its journey to Santa Fe via wagon. Purchased in 1876 from the DuBois Studio in Paris, the glass was first sent from Paris to New Orleans by sailing ship and then by paddle boat to St. Louis, MO. where it was taken by covered wagon over the Old Santa Fe Trail to the Chapel.

The Chapel was completed in 1878 and has since seen many additions and renovations such as the introduction of the Stations of the Cross, the Gothic altar and the frescos during the 1890s.

The Miraculous Staircase, which legend says was constructed or inspired by St. Joseph the Carpenter, was built sometime between 1877 and 1881. It took at least six months to build, and has two 360 degree turns with no visible means of support. It stands 20' tall and has no center support. It rests solely on its base and against the choir loft. The risers of the 33 steps are all of the same height. Made of an apparently extinct wood species, it was constructed with only square wooden pegs without glue or nails.

The Loretto Academy was closed in 1968, and the property was put up for sale. At the time of sale in 1971, Our Lady of Light Chapel was informally deconsecrated as a Catholic Chapel. Loretto Chapel is now a Santa Fe wedding venue and private museum operated and maintained, in part, for the preservation of the Miraculous Staircase and the Chapel itself. 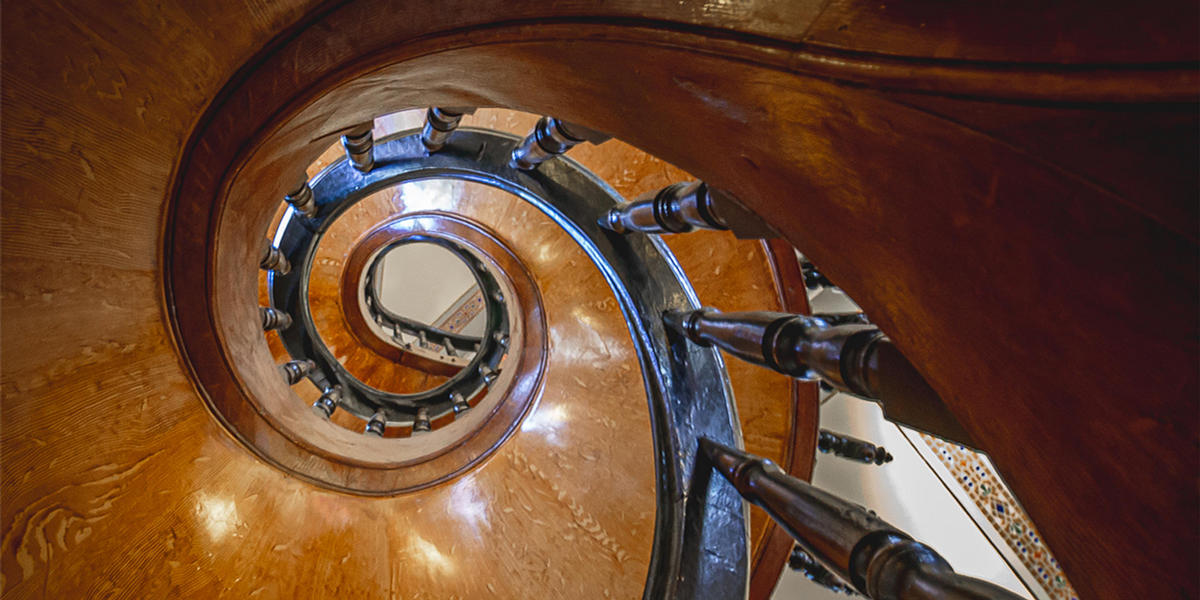 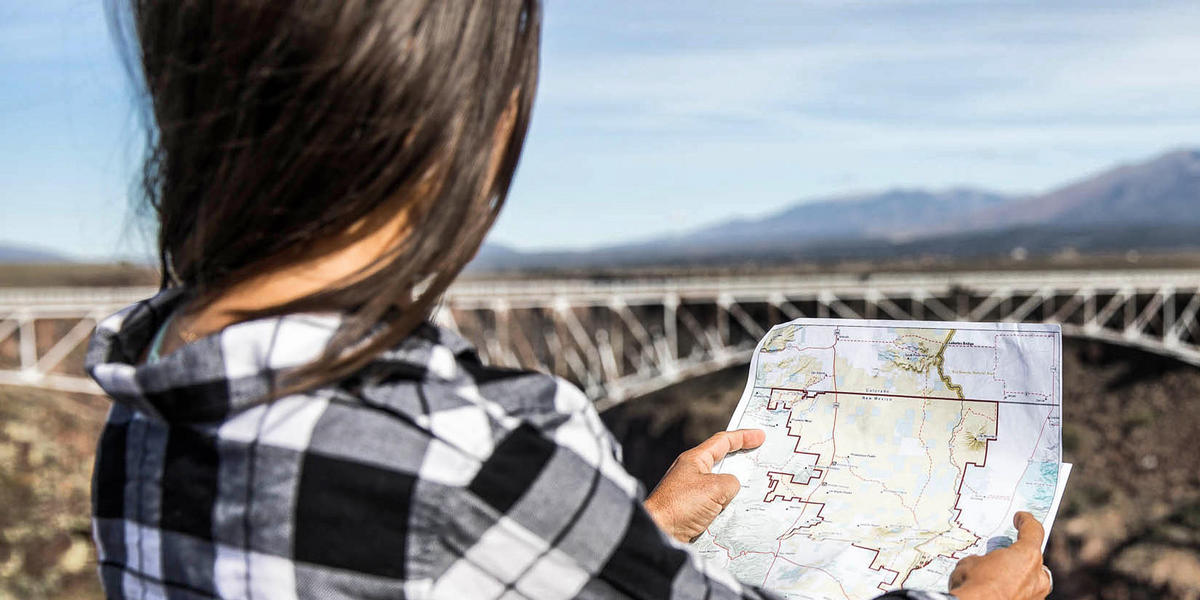 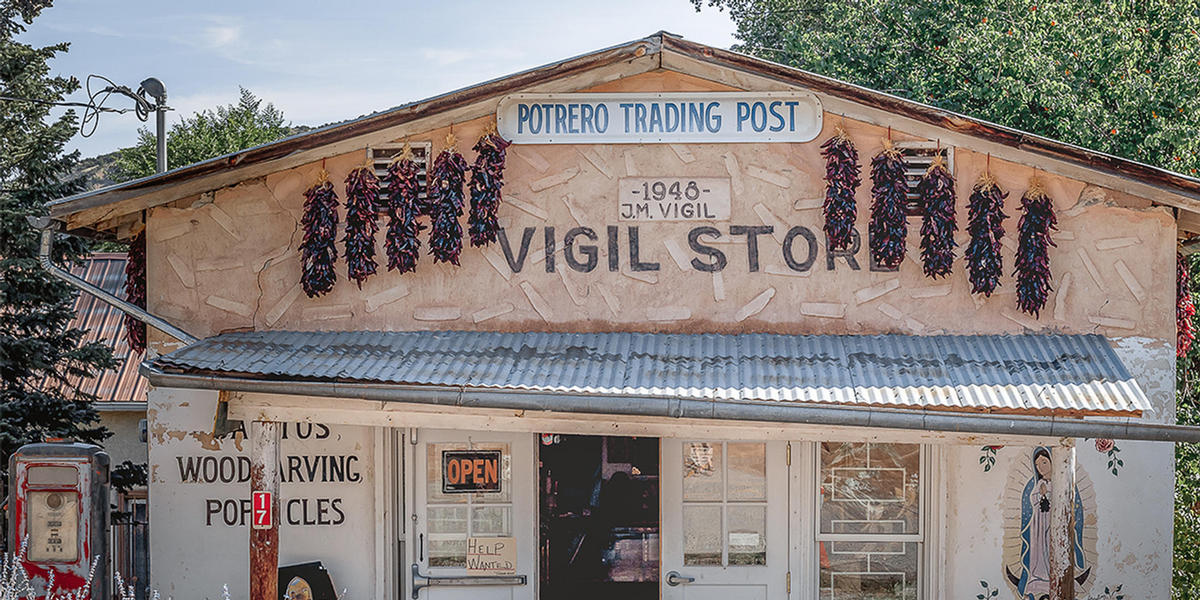